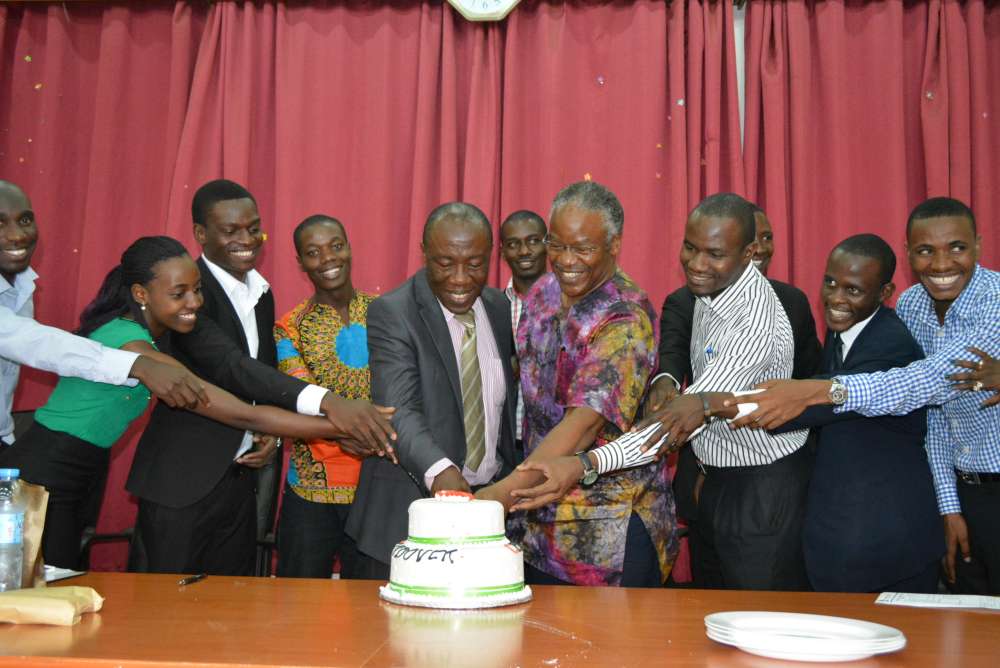 CEDAT community on Thursday April 2, 2015 witnessed the swearing in of new student leaders for the year 2015/2016.    The Principal, Dr Henry Alinaitwe, thanked all staff and students of the commitment shown towards ensuring a good academic and social environment at CEDAT. He congratulated the new and old leaders upon the smooth transition of power and elections.  He decried the noise made during the campaigns and asked the students to keep in mind that classes continue to take place despite the campaigns.  He also cautioned against putting posters on the walls.

He advised the students to report matters to their Head of Departments and the Deans for action before reporting to the Principal. “Let us give the HoDs and Deans a chance to handle your proplems,” he advised.

In their speech, delivered by outgoing MES president Mwine Musa, the students thanked the administration for the support given to them and the achievements registered over the years.

Some of the achievements they listed include improved Internet connectivity, improved sanitation in regard to the ongoing works on the toilets in the old building, the placement of dustbins in the classes, holding a successful Open Day, Intellectual challenge and various study tours made.

The students, however, cited delayed results and lecturer absenteeism as some of the areas that the administration of the college needs to look into.

Dr Allan Kenneth Birabi, who also attended the handover congratulated the new leaders upon winning the election. Quoting the late Pastor Myles Munroe “Success without successors is failure” Dr Birabi congratulated the students upon a good culture of peacefully handing over power.

The HR officer, Mr Makubuya Godfrey, asked the students to avoid engaging in strikes, emphasising that diplomacy is the best way to handle disputes and contentions.

For more pictures of the handover, please visit our gallery.