A public lecture organised by the Community Wireless Resource Centre (CWRC) on Wednesday, 7th December 2011 was conducted by Dr. Roc Berenguer of University of Navarra, Spain. Dr. Berenguer was hosted by the Department of Electrical and Computer Engineering and addressed the topic ‘Establishing a Wireless Communication Testbed’. 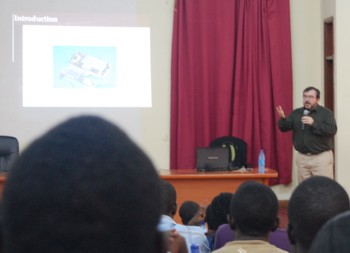 Some of the key emerging issues were that it is important that CEDAT students are well ground in the theory so as to be well placed to identify solutions for the various problems in our locales/communities. The lecture highlighted various applications for wireless communications including the mobile phones, automatic braking of cars due to wireless sensing of objects upfront, support for the blind via a glasses with a wirelessly connected camera to the ‘retina’, remote monitoring of tire temperatures for electric cars, etc etc. Some of the concerns we would have to address here in Uganda include low cost, low energy wireless solutions.

About CWRCBased on the theory gained in class and results from simulations they conduct, students would be able to take their wireless innovations to the next level by first confirming the specifications and performance with the use of 3 key equipment: spectrum analyzer, vector network analyzer and signal generators. The department has recently acquired a modern set of spectrum analyzer and vector network analyzer through the MSI grant. (The three-day specialised training by Prof. Roc prior to the public lecture was on the use of this set of equipment).

The CWRC is a research and training centre established in 2006 within the Department of Electrical and Computer Engineering, College of Engineering, Design, Art and Technology (CEDAT), Makerere University with support from the International Development Research Centre (IDRC). 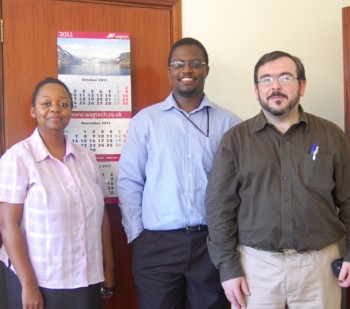 The CWRC arose out of the need to reduce the high cost of connectivity in IDRC-supported telecentres in Uganda, and to explore
optimal connectivity models such as sharing the existing bandwidth with neighboring institutions via outdoor wireless networks. It was anticipated that by managing collectively the costs of connectivity at each telecentre, more institutions could get access to Internet without heavy initial investments in satellite hardware and subscriptions. At the time, the predominant option for internet access in rural communities was via expensive satellite-based connections.

The lecture was facilitated by a grant from the Millennium Science Initiative (MSI) which enabled the CWRC to host Prof. Berenguer for this week in which he has provided a 3-day specialised training for Masters Students and Staff on the wireless communicationsDistrict, and the Lira CPAR telecentre in Lira District. These networks have been the basis for a number of industrial training and research initiatives undertaken by undergraduate and postgraduate students of the Department of Electrical and Computer Engineering testbed equipment in addition to the public lecture.

The public lecture had 133 participants including undergraduate and postgraduate students as well as academic staff.

Although this lecture was pegged to CWRC activities, the Department is planning to have a regular public lecture series beginning from next semester.