The University on Thursday 29th October 2015 officially admitted all first year students in a ceremony presided over by the Vice Chancellor, Prof. John Ddumba –Ssentamu.

The colourful ceremony, which started at 2pm, saw academic and administrative staff join the process and witness the swearing-in of the new students. The students swore allegiance to Makerere University, to abide by the rules and regulations governing the institution and that of the country. 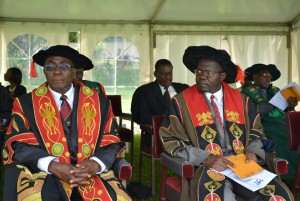 To emphasise the greatness of Makerere University the VC reminded the students of the great leaders that the institution has nurtured. These include; the late Mwalimu Julius Nyerere of Tanzania, H.E. Benjamin Mkapa of Tanzania, H.E.  Mwai  Kibaki of  Kenya, H.E  Joseph  Kabila  of the  Democratic  Republic  of  Congo,  Milton  Obote,  Sir  Edward  Muteesa, to mention a few.

“This is an institution whose legacy is that of excellence,” he said.

He cautioned the students to be self-driven as no one will police them at the university.

“University education   is   very   different   from primary   and   secondary education.  At university, you are your own supervisor. You are on your own with plenty of freedom. There is no policing because you are considered to be mature persons. We therefore don’t expect to parent you, although there is a wide range of people to guide you through your education and career choices.  These include principals, deans, lecturers, wardens, registrars and indeed  all  members  of  staff  of  the  University  in  their  various capacities,” he said.

“I strongly urge you to use your time productively while you are here. Try to use your time here at Makerere University as a platform for achieving a better tomorrow.  I urge you to make genuine  friendships,  those  that  will  add  value  to  your  life. You need to make wise choices. As we strive to provide you the best services   possible,   you   too   need   to   take   responsibility   as students. Each one of us has a role to play.”

He then declared them dully admitted to Makerere University. 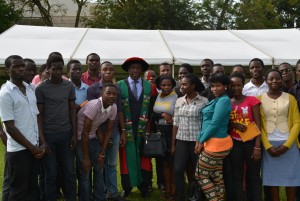 CEDAT students with the Principal, Prof. Henry Alinaitwe after the ceremony