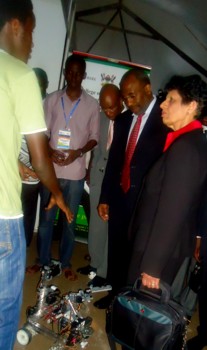 The iLabs@MAK Project, one of the innovative Projects in the College of Engineering, Design, Art and Technology, has been awarded as the best exhibitor, at the 2nd Annual ACIA awards. The day- long event, which took place at Serena Hotel, Kampala, attracted over 50 major players in Uganda’s communications sector.

The Project exhibited a model for an Explosive Ordinance Disposal (EOD) robot, a device that aids in the fight against terrorism by detecting and possibly disarming explosives. The Project was motivated by the need to demonstrate local capacity in the fight against terrorism, especially after the deadly July 9, 2010 terrorist attacks in Kampala. More importantly, the robot is one of the products from a crop of young people, emanating from the Project’s initiative to promote science and technology innovation in secondary schools: It was built by 3 former students of St. Mary’s College Kisubi, currently in their S.6 vacation; Alvin Kabwama, David Tusubira and Nigel Kinyera Okot.

“In 2010, with support from the presidential innovations fund, we started a pilot initiative to encourage creativity amongst the young generation, with two schools, St, Mary’s College Kisubi and Gayaza High School”, says the Project’s Associate Principal Investigator, Cosmas Mwikirize. “We gave the schools simple plastic materials with which to build and program simple robots to undertake meaningful tasks, and then involved the two schools in the first robotics challenge last year where the projects were show-cased. The three students were picked from the best exhibitors of the day to intern with the iLabs@MAK Project over the course of their holiday”.

The EOD robot minimizes the risk of harm to the officers involved in counter-terrorism since it can be sent out on reconnaissance   missions and performs tasks that would otherwise expose humans to danger.
Communication between the robot and the control computer is achieved through wireless communication: Bluetooth is used to send commands from the PC to the NXT brick whereas WiFi/WiMax is used to connect the control computer to the camera so that there is a live video stream depicting the robot movements. 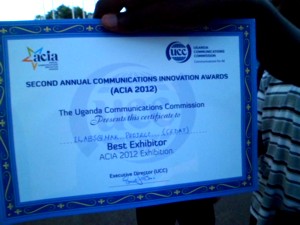 The use of an internet based camera makes it possible to view the video feed from various locations so that experts who are possibly not on site can advise on the course of action.It is made in such a way as to imitate the human senses of sight, touch, and locomotion, portrayed by an internet connectable camera, a robotic arm and wheels respectively.

The mechanical structure of the robot comprises of mainly aluminum pieces, while motion is achieved with the help of two d.c motors for the wheels and 8 servo motors for movement of the arm and rotation of the camera.  The robot utilizes a Lego NXT brick for storing and processing instructions.

The robot also has an Infrared seeker which can detect infrared radiations and the direction they are being emitted. This is useful in detection of radiation associated with the material under search.  The direction of the infrared radiations is displayed on the monitoring station, so that the movements of the robot can be altered accordingly. The robot is able to gauge the distance between itself and an obstacle by use of an ultrasonic sensor, and through dark environments by use of Light Emitting Diodes fitted below the arm and the camera. All control instructions for the robot are achieved using the LabVIEW Programming environment.

The particular model can work within a range of 20m, but this improved. The nature of the disarmament made by the robot depends on the type of device fitted onto the arm: whether cutting, shooting or lifting. 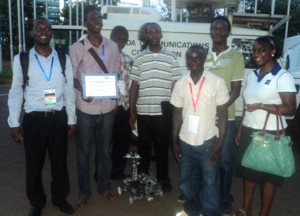 Doreen Orishaba, the coordinator of the Project says: “To us, this is a phenomenal achievement. We hope that this product will inspire young people to work harder and realize that there is no limit to their imagination”. In fact, having seen the fruits of the previous year, iLabs@MAK has now moved to extend the Schools’ Engineering Challenge to upcountry schools and more schools in the Central region. Doreen says: “This year, we will have participation from Dr. Obote College Boroboro, Lira Town College and Lango College in the North, Ntare School, Mbarara High School, Mary Hill High School and St. Joseph’s Vocational School in the West, as well as Mt. St. Mary’s Namagunga, Kings College Budo, Makerere College School, Gayaza High School and St. Mary’s College Kisubi. We will hold regional challenges, after which the winners will tussle it out at the National Challenge slated for September this year”.

She calls upon the involvement of the private sector to make this year’s challenge more enriching and glamorous.