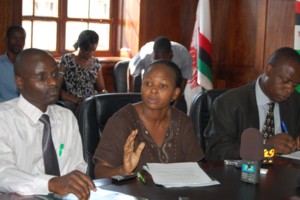 The Makerere University Vice Chancellor Prof. Venansius Baryamureeba has been awarded two global international awards for his outstanding contribution to the field of academia. This was revealed at the 26th monthly media briefing held on Friday 6th 2012 at the university’s main building. The two accolades lined up for him include the Amity Global Academic Excellence Award and the International Socrates Prize Award (Education category) which he will receive on the February 22nd and 21st March respectively.

The 2012 Amity accolade is a brainchild of the University in India that seeks to recognize distinguished scholars for their contribution to the academic world through distinct vision, innovation, research ideas and inventions. “We are glad to share with you that on the basis of study of various academic research institutes in your country, the core committee of our institute has unanimously taken the decision to honour you with our most prestigious award,” the statement from Amity University reads in part.  The University professor will also receive the International Socrates Prize Award courtesy of the Europe Business Assembly an independent corporation for development and management of economic, social and humanitarian collaboration in Oxford, UK. This function will be held at British Institute of Directors in London. “This is in recognition by the international community of his high authority and immaculate business reputation, active civic position and productive professional activities, personal contribution to the national economy and integration process,” a statement from the institute reads.

On his part, Professor Baryamureeba welcomed the accolades as an achievement to not only his person but also the university at large. The professor of computer science holds expertise in ICT training and research and has been involved in key national advisory committees on ICT. He also has been recognized as a continental ICT educator for the year 2007 and 2008.