The College of Engineering, Design, Art and Technology (CEDAT) today started its two-day exhibition. A colourful ceremony was presided over by the University Vice Chancellor Professor Venansius Baryamureeba. 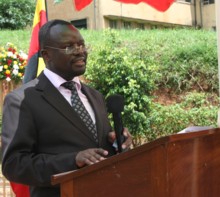 The students and researchers of the college showcased about 100 projects that they have been working on. Among the projects on display included the Kiira EV, irrigation pumps, a fruit drier, architectural drawings, paintings, sculptures, pottery, weaving, MakaPads, solar panels, a seed planter, robots, software driven innovations, briquette machine, solar water heater.

The function started with cutting of tape that was put around the Kiira EV, as a sign of officially opening the exhibition. It was followed by a tour of the exhibition and concluded with speeches.

The Principal of CEDAT, Dr. Barnabas Nawangwe and the Vice Chancellor thanked the government for the financial support that the university receives. CEDAT receives Shs5 billion for equipping laboratories, industrial training and research annually from the government.

Part of this money supports 10 research projects in the college. Prof. Baryamureeba also thanked the university’s development partners like Sweden, Norway, the Japan government and the Rockefeller Foundation among others. The VC challenged the students to come up with more relevant innovations that address the needs of society.

He congratulated the Students of Engineering who worked tirelessly to produce the first electric vehicle.

“The Kiira EV is a green revolution for it is environmentally friendly. This car has zero emissions and comes as an alternative transport solution totally dependent on green energy.  Pollution has greatly affected the environment and it is this that we want to eliminate,” he said.

“It is through such technological innovations that Makerere University can propel the private sector and drive Uganda’s economy in the 21st Century.”

The exhibition will end tomorrow Saturday November 19th at 8pm with a fashion show from students of The Margaret Trowel School of Industrial and Fine Art.