Makerere University is holding a Media Week Dec 12-16th and come Wednesday December 14th, it was D-day for CEDAT. We once 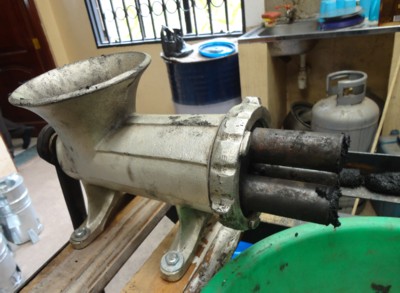 again showcased more research and innovative projects that we have. This time round, creec – Centre for Research in Energy and Energy conservation was the beneficiary of the media attention. The media was taken around the creec and told of the projects that the centre engages in: Bioenergy, Solar PV, pico-hydro and Energy management.

The journalists spent a lot of time learning about the modern cooking stoves that the centre makes as well as the making of briquettes, which are an alternative to use of charcoal. The stoves also allow for the use of maize cobs to cook.

Tree cutting has greatly contributed to climate change. Researchers are working around the clock to find alternatives to charcoal burning. Researchers are now making briquettes from agricultural waste, charcoal-dust, and a binder. This is one way that we can preserve the environment.

Briquettes are used to cook in stoves.