Makerere University on the 24th January 2012, concluded the 62nd graduation with the award of an Honorary Doctorate of Laws to President Mwai Kibaki of Kenya, in recognition of his distinguished and outstanding contribution to public service at the national, regional and international levels – especially in the areas of Academic Excellence, Political, Social and Economic reforms. 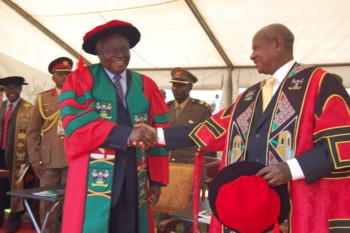 Described as one of Africa’s illustrious sons and an eminent Statesman, President Mwai Kibaki, was applauded for his exemplary leadership. Part of the citation revealed that H.E. Dr. Emilio Stanley Mwai Kibaki worked as a bus conductor for the now defunct Othaya Bus Service Company during his school days.

Raised in a humble family, President Kibaki worked hard in School and earned a scholarship to join the then Makerere College (now Makerere

University) – where he pursued a Bachelor of Arts Degree in Economics, History and Political Science. He graduated in 1955 with a First Class Bachelor of Arts degree. President Kibaki also served as Vice Chairman of the Makerere Students Guild (1954-1955). In 1955, he enrolled at the London School of Economics for a Bachelor of Science in Public Finance, and graduated with distinction in 1958. He then served his alma mater-Makerere University as an Assistant Lecturer in the Department of Economics from 1958 to 1960. Joining Makerere was a turning point for the fresh Doctor as acknowledged in his acceptance speech:

“This recognition is a great honour to me, my family and Country. I shall cherish it for the rest of my life. Being here has triggered a great sense of nostalgia for the many years I studied and lectured at this great institution. Many of my leadership skills were developed and nurtured here,’’ he stressed. “I sincerely thank Makerere University for the honour bestowed upon me. I look forward to working closely with you,’’ he added. 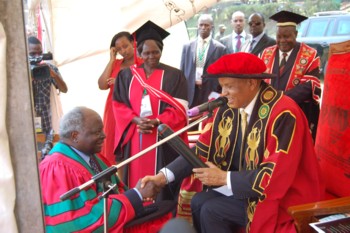 President Kibaki called upon the young generation to put their countries’

interest before self, adding that the current challenges facing Africa can be solved through a combination of homegrown and borrowed traditions.  He applauded Makerere University for making the electric car, the Kiira EV and called for mass production of such innovations.

President Yoweri Museveni revealed that he has secured approval for funding towards Makerere University, especially in light of the Presidential Initiative that kick started a number of Projects in  the College of Engineering, Design, Art and Technology – CEDAT; the School of Food Technology, Nutrition and Bio-Engineering; and the College of Veterinary medicine, Animal Resource and Bio Security, CoVAB.

“I applaud the young men and their professors for putting the little money we gave them to proper use. The NRM caucus has resolved to support me now.

They will get for you the money you wanted,’’ he emphasized to the cheering crowd. 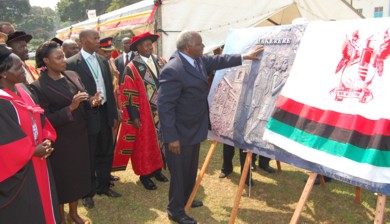 For those already honoured we shall wait for their consent before we begin the fundraising drive to raise funds to put up buildings in their names. These projects are very feasible in the sense that for each project a contribution of an average of US$1,000 per person from 10,000 persons would raise US$10 million. For President Kibaki, who is being honoured today, we would like to request you to accept to be the Chairperson of Makerere University Mwai Kibaki endowment fund that shall raise funds that shall be used among others to put up a building at Makerere University that shall be named after you,’’ he explained.

The two Excellencies also officially launched the Collegiate system at Makerere University. To symbolize this launch, they unveiled a beautiful relief sculpture designed by Assoc. Prof. George Kyeyune from the College of Engineering, Design, Art and Technology – CEDAT.

“This sculpture is a presentation of Makerere’s transition into a Collegiate system. Its texture is similar to a rock to signify Makerere as a strong giant. It also shows that Makerere is striving for better,’’

Inscribed on this sculpture are the names of the nine constituent Makerere University Colleges listed in alphabetical order. The sculpture will be put in the main building for all to see.

The 62nd graduation has come to a close. Special thanks to the various teams that have seen the event, which started on 16th Jan. 2012, end successfully. It is worth noting that last week, students from the College of Business And Management Sciences, CoBAMS, exhibited a high level of discipline deserving of the Chancellor’s mention.