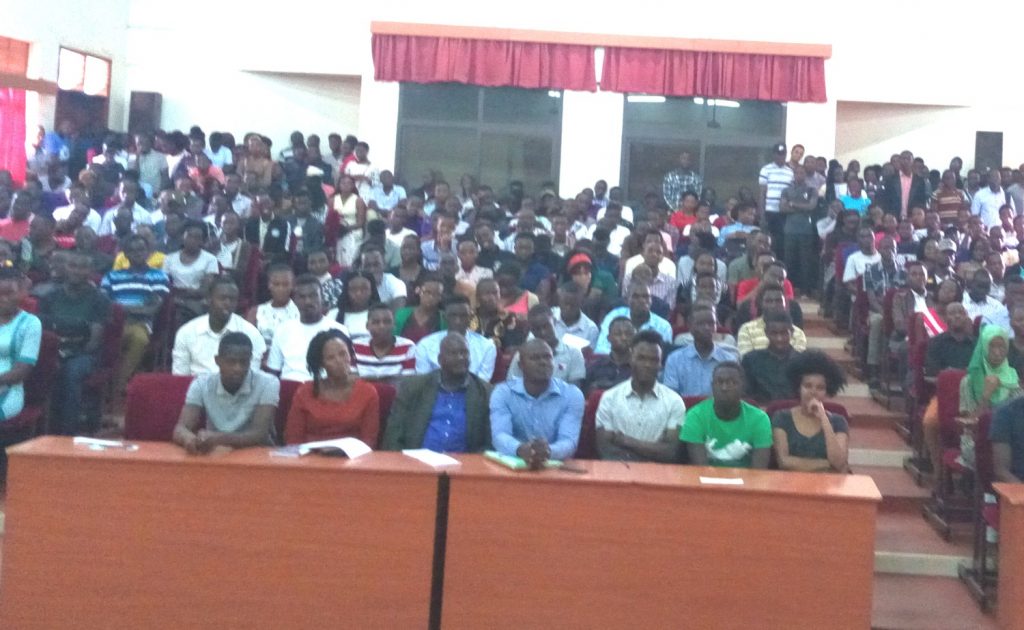 Management and staff of the college today August 7, 2018 meet first year students as part of their orientation to the college.

In his address to the students, the Principal of CEDAT, Prof. Henry Alinaitwe welcomed the students and congratulated them upon being admitted to study at CEDAT. The Principal gave the students the general information on the college, fees payment, university regulations, discipline, politics and studying.

He advised them to start reading hard right from the start so as to keep good grades. “Do not take it for granted that because you excelled at A – level, you will always excel. Concentrate on your studies. Get a copy of the time table and appear in class starting on Monday 13th August 2018 without fail. Attend to all class activities and meet deadlines set by the lecturers,” he advised the students.

He cautioned the students against engaging in violent demonstrations because they lead to destruction of property and arrests for many students. He advised them against engaging in examination malpractice such as copying during exams and forging of records. Students found to have engaged in any kind of examination malpractices are subject to disciplinary action including suspension and dismissal from the University.

The college bursar, Mr Kayima Stephen called on all private students to pay fees on time. He briefed students on the new payment system called AIMS. He informed them that some people had been stationed at the entrance of the new building to help students generate payment numbers that are required by the bank before payment of any university dues.

The registrar also informed students about registration on the AIMS system. He said registration would start on August 13, 2018.

The Dean of MTSIFA called on the students to manage their time properly, avoid misbehaving and follow the rules and regulations of the university. He cautioned against absenteeism and drug use among students.

The Manager for the guidance and counselling centre, Mr Nsubuga, called on students to utilize the centre. He advised that many students drop out of school due to various reasons that could have been solved by talking to a counselor. He advised them to make the hard decision to read now so that life will be easy later.