You are invited to attend the introduction of our book, The History of Kigezi: 1900-1970, written and edited by Edward Nobel Bisamunyu and Amanda Tumusiime of Makerere University, Kampala, Monday, 26 February 2018 at 4.00 pm at Makerere Art Gallery. Additional chapters in this book have been derived from a chapter written previously by the late Eli Nathan Bisamunyu for the book The History of Kigezi in SW Uganda, which was edited by Professor Donald Denoon and published by the National Trust Adult Education Centre in 1972 under the auspices of the Milton Obote Foundation. 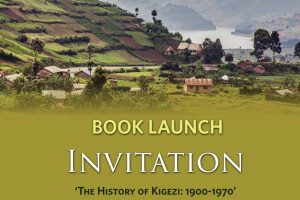 From the beginning of the 20th Century, there was rumbling in Kigezi. Germany and Belgium wished to stake claims on this mountainous region. The British, however, had already done so on paper and through exploration of East Africa by John Hanning Speke. A party of Germans, later, arrived in Kigezi in force to establish flags in a few prominent places including Kabale, Kikungiri, Kagarama, Mparo and elsewhere in the hope of colonization of the region by Germany. As they did so, they also killed people in the spirit of Karl Peters, the German explorer who was later praised by Adolf Hitler. Belgians had had no less thirst for African blood to the north of Kigezi, in the once peaceful chiefdom of Makobore. This total aggression, in fact, set the stage for Kigezi to accept British rule, seemingly the lesser partner of the three European evils. Kigezi District was an elephant in that she would never forget those who had upset her peace.

At about the same time, Nyiragahumuza, or, as she came to be called in Kigezi, Muhumuza, fled into the hills and consciousness of Kigezi to express her wrath against and objection to the Germans, who had helped to deprive her son, Bulegyeya, of his right to the throne after the death of his father, Rwabugiri, of smallpox. Nyiragahumuza had hoped to round-up hordes of Abakiga fighters to rout Umwami Musinga, Rwabugiri’s half-brother, from the throne. Nyiragahumuza had, however, not discerned the might of guns versus African’s spears. She was also certain that Nyabingi, or specific evil spirits, descended from the late Queen Nyabingi of Karagwe, after whom the spirits were named. The spirits, it was hoped, would bring to Rwanda complete mayhem and overcome Europeans and Umwami Musinga. She did not succeed but she impressed and inspired Abakiga, some of whom persisted in fighting the European colonial machinery inprogress in the region.

Nyiragahumuza’s defeat marked the beginning of British rule in Kigezi. From there, development includes the loss of useful and meaningless traditions of the district and, later, in the newly independent Uganda until 1970, after which Idi Amin ascended to power with a devastating erasure of what had taken years to build. The emergence of a character that brought together varying peoples across Kigezi through forces of long-established tradition and British colonial rule, imported religious thinking and missionary influences by Roman Catholics, Anglican Protestants and Moslems is remarkable and worth a note in history.