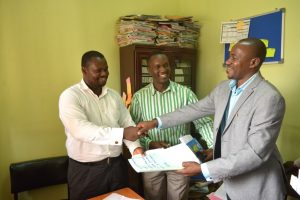 This afternoon, members of the CEDAT and CNS administration, together with representation from Makerere University’s Directorate of Internal Audit witnessed the handover of the CEDAT / CNS procurement office. The office, manned by Mr. Stephen Byaruhanga has been officially handed over to Mr. Deo Ibanda. Mr. Ibanda was formerly procurement officer in CEES / School of Law.

The Principal, Prof. Henry Alinaitwe thanked Mr. Byarugana for diligently serving the College in this role for two and a half years. He stressed the importance of the Procurement offices in Public institutions sighting that they impact directly on the delivery and effectiveness of operations in these institutions.

Mr. Stephen Byarugaba has been transferred to the University’s main procurement office and will be based at Lincoln flats. In his remarks, he thanked everyone for the supportive roles played in procurement and thanked the principal in particular for his guidance and good council while operating in the office. Even though the procurement office faced a number of challenges during his tenure, he noted that the office did not generate any audit queries and performed well university-wide. This performance, he attributed to the guidance from the principal.

Mr. Ibanda in his remarks expressed his gratitude for the opportunity to work at CEDAT and said he looks forward to working with his new colleagues at the College.